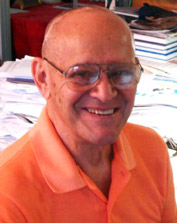 Editor’s Note — After authoring more than 150 Spousal Caregiving columns, Bill Andrew is shifting gears and writing a new column on our website. It’s titledCaregiving Lessons Learned, and it draws from the experiences of Bill’s 14 years of tireless, round-the-clock caregiving for his loving wife, Carol, who passed away in June 2008 after a lengthy battle with Alzheimer’s disease, as well as his leadership of a caregiver support group in Florida.

Bill’s new column targets caregiving from a broader caregiving perspective, offering sound advice and useful tips – actually, lessons learned! – based on his many caregiving years and addresses the concerns and interests of all elder-caregivers.

We hope you’ll check out Bill’s Caregiving Lessons Learned by clicking here, and please note that all of Bill’s Spousal Caregiving columns will remain available to you in our archive.

I recently came across an article on some of the potential causes of memory problems, and I wanted to share them with you.  It seems like we all forget things sometimes, perhaps more often as we get older.  Although many people believe that memory loss is an early sign of Alzheimer’s disease, studies show that more than 90% of those who complain about poor memory do not have Alzheimer’s.  There may be as many as 200 dementia disorders of which Alzheimer’s is the most common.  Many of these dementia disorders are reversible; Alzheimer’s is not.

So, if it is not Alzheimer’s, what is it?  According to Dr. Majid Fotuhi, of the Johns Hopkins University School of Medicine, who wrote the article, some of the potential causes, and potential treatments, include:

Depression.  This is probably the leading cause of memory loss.  Depressed people typically have low brain levels of serotonin and norepinephrine.  These are neurochemicals that normally activate the hippocampus part of the brain, which is where information is stored and retrieved — in other words, memory.

Other warning signs of depression include changes in appetite, changes in sleep patterns, not enjoying things that we used to enjoy, mood swings, emotional problems, and even self-criticism.

Potential treatments include antidepressants, such as selective serotonin reuptake inhibitors (SSRIs), which relieve the depression and improve memory, concentration, and other cognitive functions rather quickly.

Stress.  Many people who experience memory problems often have chronic stress in their lives due to money worries, family problems, job issues, and other problems.  This stress raises levels of cortisol, which is a hormone that improves concentration during stressful situations. However, cortisol also damages the hippocampus when these brain levels of cortisol remain high due to continuous stress.  It has been found that stress, and anxiety, also caused by other periodic life events can make it hard to concentrate and, therefore, absorb information. Obviously, you can not retrieve information from memory if it doesn’t get into memory in the first place.

If you do not take stress seriously and do something about it, your memory problems will continue to worsen.  Potential “treatments” include getting regular exercise such as walking, practicing relaxation techniques like deep breathing, yoga, and the relaxation response, as well as engaging in more pleasurable activities that will reduce stress.

Poor sleep.  If you don’t get enough sleep each night — eight hours is recommended — your stress and anxiety levels will increase, which in turn, raises cortisol levels.  Depression and stress, as described above, can cause insomnia. So, if you address these two, normal sleep patterns may improve.

Some people experience disturbed sleep often caused by obstructive sleep apnea which is periodic interruptions in breathing.  These so-called “micro-awakenings,” which occur many times during the night, prevent these people from entering the deep-sleep stages which is where your brain is refreshed and your memories are embedded.

One potential treatment is a mask called “nCPAP” (nasal continuous positive airway pressure) which your doctor may recommend.  This sleep mask creates air pressure that keeps the upper airways open which prevents apnea and snoring.  Many people who have sleep apnea are overweight.  Apnea and snoring problems are often reduced when these people lose weight — often as little as 10 pounds.  What happens is that fatty tissue around the upper airway tends to sag during sleep and obstructs the normal flow of air.  There are also surgical interventions that may help as well.

Vitamin B12 Deficiency.  According to Dr. Fotuhi, vitamin B12 deficiency accounts for as much as 10% of non-Alzheimer’s memory loss.  This is a typical indication in the elderly.  B12 is used by the body to produce myelin which is the sheathing (covering) on nerve cells.  Low B12 levels cause myelin abnormalities that slow the transmission of nerve signals which can impair memory and other cognitive functions, especially when accompanied by mini-strokes or other types of vascular problems.

It has been found that even if you consume enough B12 — found in meat, dairy, eggs, fish — you may have low B12 levels.  This is because these people do not produce enough intrinsic factor which is a protein secreted by stomach cells required for B12 absorption.  Young people often incur low intrinsic factor which may lead to memory problems.  In the elderly, low B12 levels are usually caused by the body’s slower absorption in the gastrointestinal tract.

Your doctor will usually check your B12 level if you have unexplained memory problems.  If low, you will need supplemental B12.  Many elderly require monthly B12 injections since oral B12 is not effective if the body is not producing enough intrinsic factor.  If you follow a strict vegetarian (vegan) diet — that is, no animal-based foods — Dr. Fotuhi recommends 6mcg (micrograms) of B12 daily.  Since the vegan diet does not affect intrinsic factors levels, oral supplements can be effective.  Most people taking a quality multivitamin may not have a problem.

Your doctor may recommend thyroid hormone supplements or surgery, if indicated.  Often dramatic improvements in memory and other cognitive functions results when thyroid hormone is maintained at proper levels.

Mini-strokes.  Mini-strokes are caused by a blockage in blood vessels in the brain.  Most of them affect very tiny, rice-sized areas of the brain and may cause minor, and sometimes transitory, memory loss.  Mini-strokes are often so subtle that people may have 10-20 of them without serious complications.  Indications include some memory loss, slower movement, and weaker handshake.

If you doctor suspects a mini-stroke, he/she may recommend a brain CT scan.  While you can not reverse the damage, you can reduce the risk o future mini-strokes and, perhaps, a major stroke.  The doctor may also recommend that you do the things you would do to prevent a heart attack: maintain healthy blood pressure, stop smoking, lose weight, etc.

The foregoing potential causes for memory problems, and potential treatments, are not meant to be all-inclusive.  Nor is any of this information to be construed as medical advice from me.  Talk to your doctor.

Hopefully, readers of this column will benefit from the above suggestions.  If so, I would appreciate hearing from you.

Please e-mail me at ASKBill@caregivershome.com with your comments and/or reactions.  I will include them in a future column with your permission.  Please provide your full name and address.  In the column, I will only use your first name and the initial of your last name as well as your city and state.  Thank you.

“The mind is slow to unlearn what it learned early.”

Bill Andrew identifies himself as a former “nutritionally-empowered Alzheimer’s caregiver” who attributes the slow-down in progression of Alzheimer’s disease in his wife, Carol – and the growth of his own personal emotional, mental, physical, and spiritual capability and strength to provide quality 24/7 care for her in their own home – to the targeted nutritional supplements they both took on a daily basis. Carol went to her Heavenly reward on June 9, 2008 – Bill continues on to advocate for family caregivers. Contact Bill with your caregiving questions and comments via email at ASKBill@caregivershome.com.